A 75-year-old man with a history of sudden (painless) loss of vision in the right eye along with recent jaw claudication and weight loss.

According to his accounts, his vision loss developed five days before his consultation. He has a medical history of prior ischaemic stroke, hypertension, hyperlipidemia, and heavy smoking years. His visual acuity was reduced to hand movements in his right eye and 6/7.5 in his left. The swinging light test showed a right relative afferent pupillary defect.

A fundus examination done on his right eye indicated that he has a pale swollen disk, retinal edema and pallor, and a red spot suggesting a central retinal artery occlusion (CRAO). The fundus of his left eye appears to be normal. CRAO is known to be caused by embolism, site thrombosis, or arteritis. 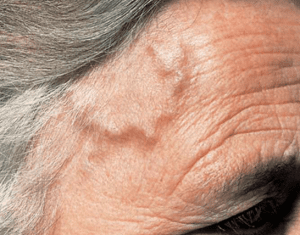 Previously, the patient had a 13-year history of mysterious persistent thrombocytosis with more recent leukocytosis. During the presentation, his hemoglobin levels were normal with a white cell count of 22.1 x 109/ L (normal range, 4.0–11.0 × 109L) and a platelet count of 1083 × 109

He was treated empirically for GCA with intravenous methylprednisolone. This was followed by a tapering course of oral prednisolone. In a latest temporal artery biopsy, it showed that the person had occasional multinucleate giant cells, yet still no granulomata or luminal thrombosis. Thus confirming the diagnosis of GCA.

It was also revealed in subsequent investigations that a Janus kinase 2 (JAK2) V617F mutation was present in the peripheral blood. The bone marrow biopsy results showed changes indicative of primary myelofibrosis. The patient was given cytoreductive treatment with hydroxyurea with a low dose of aspirin. Twelve months after the treatment, the patient showed no improvement in visual acuity.

CRAO is an atypical condition occurring only in one out of a hundred thousand cases. Most cases of CRAO results in visual acuity of counting fingers or worse. Common findings also include cherry-red spots in the eye.

CRAO can be classified based on its pathogenesis (arteritic vs. non-arteritic). Arteritic CRAO is much less common and accounts for only about 4.5% cases of all recorded CRAO cases. It’s also often caused by GCA. Other causes of arteritic CRAO is arterial spasms and aneurysms.

Arteries can be re-canalized through time and edema can clear. Optic atrophy if not prevented can lead to permanent loss of vision. It can cause irreversible damage to the neural tissue 14 minutes after complete blockage to the central artery retinal.

On the other hand, 90% of CRAO cases are non-arteritic with thromboembolism from the carotid artery. The risk factors for non-arteritic CRAO include smoking tobacco, hypertension, and diabetes mellitus.

The patient had many of the mentioned risk factors. Despite being rare, myeloproliferative neoplasms are recognized as a cause for both non-arteritic CRAO and central retinal vein occlusion. CRAO is considered an ocular emergency. Patients with CRAO suffer from monocular visual loss with final visual acuity of counting fingers or worse.

What are Myeloproliferative Neoplasms (MPN)?

Myeloproliferative neoplasms including polycythemia vera, essential thrombocythaemia, and primary myelofibrosis are a very rare type of blood cancer that affect less than six people in 100,000.

This disease happens when excess white blood, red blood, or platelets are produced in the bone marrow. Cases are discovered often when abnormal blood counts are detected. They often come with fatigue, bleeding, itching, or thrombosis.

Currently, there are three main types of MPNs: Polycythemia vera, essential thrombocythemia, and myelofibrosis. Splenomegaly is common in myelofibrosis. In the case of the patient, his primary myelofibrosis was delayed after a decade when he first had thrombocytosis. This delayed diagnosis is quite common among patients having asymptomatic blood count abnormalities. Additionally, the reactive causes of thrombocytosis are common and can complicate assessment.

What is Giant cell arteritis (GCA)?

Giant cell arteritis is caused by central retinal artery occlusion. It is rare and needs to be an excluded cause for patients over 50 years of age. Normal inflammatory markers do not exclude GCA.

Aside from blindness caused by diminished blood flow to the eyes. GCA can also cause other serious complications. GCA can also cause aortic aneurysm when the large artery that runs from your chest to abdomen has weakened. If it burst, it can cause life-threatening internal bleeding.

As much as 60% of patients with primary myelofibrosis have this mutation. It is considered an independent risk factor for thrombosis. The JAK2 gene was first cloned in 1989 and is currently a member of the four Janus kinases 1,2, and 3 and tyrosine kinase 2.

Persistent polycythemia, thrombocytosis, or leukocytosis should be noted for myeloproliferative neoplasms. Delays in diagnosis can result in an increase in preventable thrombotic complications.

The case presented above calls attention to the importance of recognizing both GCA and myeloproliferative neoplasm as rare but probable causes of CRAO.

In the study, the risk factors were overlooked because of the patient’s strong cardiovascular risk factor and history of ischaemic stroke. A normal rate for erythrocyte and C-reactive protein is usually rare in GCA. The absence of elevated inflammatory markers does not exclude a diagnosis of GCA when other typical symptoms are present.

Treatment and diagnosis of GCA are critical because if not treated 80% of GCA patients will go blind in their contralateral eye within a few days. Earlier diagnosis of myeloproliferative neoplasm can prevent serious morbidity from thrombotic complications.

Study results: Use of atropine to control progression of myopia