Medical terminology is composed of a prefix, root word, and suffix:
Prefix: A prefix is placed at the beginning of a word to modify or change its meaning. Pre means "before." Prefixes may also indicate a location, number, or time.
Root: central part of a word.
Suffix: The ending part of a word that modifies the meaning of the word.
Additional resources:   [Intro to med terms] [Med terms rules] [Med term reference] [Word building reference]  [Practice Exams] 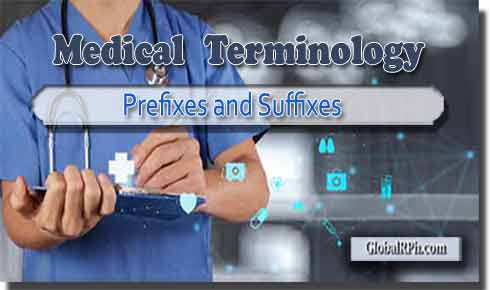 Medical terminology is used to precisely describe the human body components, processes, illnesses, medical procedures, and pharmacology. Medical terms are used in the field of medicine, and clinical settings. This section deals with all med terms beginning with the letter G, and features medical roots, prefixes and suffixes.

substance that produces. that which generates

produced by or in. pertaining to formation; producing

See if you can spot the suffixes, prefixes, and/or root words.

Gait- The way a person walks.

Gallbladder- A pear-shaped sac lodged in a fossa on the visceral surface of the liver, between the right and quadrate liver lobes; functions as a reservoir of bile.

Gallstones- Small, hard stones, usually made of cholesterol or bilirubin, that form in the gallbladder.

Gamete- General term for a mature sperm or ovum.

Gamma camera- The gamma camera also called the Anger camera and a scintillation camera is the imaging device in nuclear medicine to produce functional scans of the brain, lungs, thyroid, liver, skeleton, gallbladder, and kidneys.

Gamma globulin- A class of serum globulins produced by lymphocytes and plasma cells of the immune system. They exhibit gamma electrophoretic mobility.

Gamma rays- High-energy electromagnetic radiation of the shortest wavelength emitted by an unstable nucleus of an atom produced during radioactive decay.

Ganglionectomy- Surgical removal of a ganglion.

epigastric region
epi- = upon, over
gastr/o = stomach
-ic = pertaining to

Gastrorrhagia - Gastric hemorrhage caused by an injury or infection.

Gastric analysis- A clinical diagnostic procedure used to examine hydrochloric acid and other stomach secretions. The most common reasons for this test are to look for blood in the gastrointestinal tract or to confirm suspected Zollinger Ellison syndrome.

Gastric antrum- The portion of the stomach adjoining the pylorus, which contains mucus-secreting cells and gastrin-secreting endocrine cells.

Gastritis - Inflammation, irritation, or erosion of the gastric mucosa.

Gastrocnemius - The larger, superficial muscle that makes up the calf and contributes to knee flexion.

Gastroenterologist- A doctor who specializes in the study, diagnosis, and treatment of disorders of the digestive system.

Gastrointestinal endoscopy- A diagnostic and therapeutic procedure that allows an internist to image, assess, and treat gastrointestinal disorders. It is categorized into i) Upper endoscopy - visualization of organs in the upper GI tract (esophagus, stomach, duodenum, jejunum) and ii) lower endoscopy - visualization of organs in the lower GI tract (rectum, colon, and terminal ileum).

Gastrointestinal (GI) - Collective term for the stomach and intestines.

Gastrointestinal series- A radiographic test used to define the anatomy of the GI tract. An upper GI series reveals structural and functional abnormalities of the upper GI tract whereas a lower GI series is to diagnose problems of the lower GI tract.

Gastrospasm - Involuntary contraction of the abdominal muscles, stomach, or intestines.

Gonorrhea- A sexually transmitted infection (STI) caused by gram-negative diplococcus Neisseria gonorrhoeae. Though it is referred to as an infection of the genital tract it may also affect skin, eyes, throat, joint, pharynx, or blood.

Granulocyte colony-stimulating factor (G-CSF)- A glycoprotein that facilitates proliferation, differentiation, and survival of neutrophils in the bone marrow.

Gender disorders -Persistent psychological distress that results from the discrepancy between a person's biological sex and their gender identity.

Generic name- The chemical name of a drug or a term referring to the 'active ingredient' of a drug. For example, diazepam is the generic name, and Valium or Vazepam is a brand name for the same drug, which is a commonly used anxiolytic.

Genesis- Suffix denoting 'formation', 'beginning', 'origin', or 'generation' as in glycogenesis, the formation of glycogen.

Genital herpes- A sexually transmitted infection (STI)caused by a virus called herpes simplex virus (HSV), characterized by painful blisters and sores on and around the genitals.

Genital warts- Small, raised growths show up on the skin around the genitals and anus.

Genitourinary- A term that refers to the urinary and genital organs.

Geriatrics -A specialty focused on diagnosis, treatment, and prevention of disease in elderly individuals.

Gerontics -Relating to old age or the elderly.

Gerontology - The study of aging from all aspects - biologic, clinical, psychologic, sociologic, legal, economic, and political.

Gerontophobia- An anxiety disorder characterized by an irrational fear of the elderly, of growing old, or both.

Geropsychiatry- A subspecialty of psychiatry dealing with the study, treatment, and prevention of psychiatric aspects of aging and mental disorders in the elderly.

Gestation - The time between conception and birth, during which the fetus develops in the uterus.

Gestational hypertension- Hypertension develops after 20 weeks of gestation, without proteinuria, and resolves postpartum.

Gestational period- The length of pregnancy, which is calculated as 280 days, or 40 weeks from the first day of the last menstrual period (LMP).

Gigantism- An endocrine disorder characterized by abnormally high linear growth in children; occurs when the pituitary gland makes too much growth hormone.

Gingivae -Anatomical term for the gums; dense fibrous tissue, covered by a mucosal membrane, that surrounds the teeth and the marginal parts of the alveolar bone.

Glands- A gland is an organ, cell, or tissue specialized to secrete substances for use in the body. There are many glands throughout the body, but they all fall into two types: endocrine and exocrine.

Glans penis- Head or tip of the penis.

Glaucoma- An umbrella term for the ocular diseases caused due to increased intraocular pressure; characterized by atrophy of the optic nerve which creates a gray gleam in the affected eyes.

Globin-Globin, the protein portion of hemoglobin. Designated as alpha 1 and 2, and beta 1 and 2, globins permit hemoglobin to transport oxygen.

Globulins- A group of serum proteins made in the liver. They are classified as alpha, beta, or gamma depending on their electrophoretic mobility.

Glomerulonephritis- Acute or chronic inflammation of the glomeruli.

Glomerulus- A tuft of anastomosing capillaries located in the renal cortex.

Glomerular filtrate- The fluid that filters out the blood through the capillary walls of glomeruli. It has the same composition as plasma but with far less plasma proteins or cells and more water, glucose, amino acids, salts, urea, and creatinine.

Glomerular filtration rate (GFR)- The volume of fluid filtered in the glomerulus per unit of time; considered the best overall index of renal function

Glossal- Pertaining to the tongue, lingual.

Glottis- The glottis, otherwise known anatomically as the rima glottidis, is the natural space between the vocal folds in the larynx.

Glucocorticoids- Steroid hormones produced by the adrenal cortex, and have anti-inflammatory, immunosuppressant, metabolic, and endocrine effects.

Glucagon- A polypeptide hormone secreted by the alpha-cells of the pancreatic islets; by promoting glycogenolysis and gluconeogenesis, glucagon plays a significant role in preventing a fall in blood glucose levels.

Glucose- The simplest of the carbohydrates; also the cell's primary source of energy.

Gluteus maximus- The largest of the three buttocks muscles, responsible for the movement of hip and thigh.

Gluteus medius- The middle of the three buttocks muscles, responsible for the outwards rotation of the thigh, enables a steady walking gait.

Glycogen- Principal form in which carbohydrate is stored chiefly in the liver as a reserve of glucose for other cells and tissues.

Glycogenesis- Conversion of glucose to glycogen for storage in the liver and muscle cells for later use as needed. It takes place when blood sugar levels are high.

glyc/o = sugar, sweet
-genesis = the production of; formation of

Glycogenolysis- The breakdown of glycogen into glucose when blood glucose levels are low; primarily occurs in the myocytes and hepatocytes.

Glycolysis- Glycolysis, a series of ten enzyme-catalyzed reactions that release energy within glucose; occurs in the cytoplasm of almost all organisms.

Goiter- Hyperplasia or enlargement of the thyroid gland due to iodine deficiency in the diet. Other causes of goiter include hyperthyroidism, inflammation, thyroid cancer, or autoimmune reactions.

Gonadocorticoids- Sex hormones secreted by the inner layer of the adrenal cortex.

Gonadotropic- Denoting the secretions of the anterior pituitary gland.

Gonadotropin- Glycoprotein hormones secreted by the anterior pituitary gland and the placenta, and act on the gonads.

Gonads- A term used to refer to the glands that produce sperm in males and eggs in females.

Gonioscopy- A differential diagnostic procedure for the evaluation of the anterior chamber angle (ACA). It helps to categorize the type of glaucoma i.e., open- or closed-angle.

Goodell’s sign- Softening of the uterine cervix around the sixth week of gestation; a sign of pregnancy.

Gout- A painful form of arthritis, affecting a single joint at a time - usually the big toe but can also affect joints in feet, hands, wrists, elbows, or knees.

Graafian follicle- Fluid-filled spherical cavity for the developing ovum in the cortex of the ovary.

Graft-- A graft is the transplantation of healthy tissue or an organ to repair or rebuild diseased tissue or organ in the same person or a separate individual. For example, coronary artery bypass graft (CABG), uses internal mammary arteries, saphenous vein, and radial arteries as grafts.

Granulocyte-macrophage colony-stimulating factor (GM-CSF)- A cytokine that acts as a hematopoietic growth factor and immune modulator.

Granulocytosis- An abnormally high count of granulocytes in the blood as a reaction to bacterial infection, sepsis, bone marrow disorders, or use of corticosteroids.

Suffix denoting an instrument for recording, as in radiograph, cardiograph

Suffix denoting the process of recording, as in radiography, cardiography.

Gray matter- A major part of the central nervous system that is mostly neuronal cell bodies and unmyelinated axons, giving a gray appearance.

Greenstick fracture- Partial fracture; one side of a bone is broken and the other is bent (like a tree's green branch). Mostly occur in infants or toddlers.

Grunting- The deep, abnormal expiratory sound caused by a sudden closure of the glottis; usually observed in infants suffering from respiratory distress.

Guillain-Barré syndrome-- Guillain–Barre syndrome (GBS), also known as Landry's paralysis1, is an immune-mediated disorder of the peripheral nervous system (PNS). GBS is typically triggered by a respiratory or gastrointestinal infection, or an aberrant autoimmune response targeting peripheral nerves and their spinal roots, leading to loss of reflex and paralysis.

Gums- Gums, also known as the gingiva, pink-colored keratinized mucosa that surrounds and protects the teeth.

Gynecologist- A physician who specializes in female reproductive health.

Gynecology -The branch of medicine that deals with the diagnosis, treatment, and care of the female reproductive system.

Increasing your understanding of medical terminology

This section was developed for 'speed learning' of medical terminology. Start by reviewing the meanings for a block of medical terms, and then go back and choose a previous term randomly and try to recall the meaning of that particular medical term before hovering over the term to determine the answer. These frequent mini-tests will accelerate the learning process and in a relatively short period of time, you will be able to quickly recall the meaning of all of the listed medical terms. This method of learning is superior to flash cards because of the frequent exposure and testing of your recall.
a b c1 c2 d e f g h i j k l m n o p q r s t u v w x y
Previous | Next