The Body Mass Index Calculator or BMI Calculator determines if your weight is in proportion to your height based on Federal guidelines released by the National Heart, Lung, and Blood Institute. 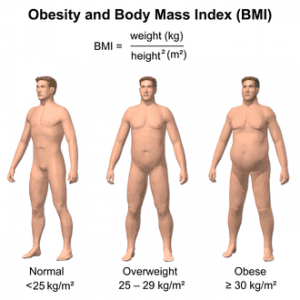 The concept of Body Mass Index or BMI initially came into the picture in between 1830 and 1850. Adolphe Quetelet referred it as "social physics". He was a mathematician, astronomer, statistician, and sociologist in Belgium. The primary reason behind developing such a index was the rising number of obesity cases in Western countries.

This index is used to determine body fat in the case of population studies but not in case of individuals. Since it is simple, it has usage in the preliminary diagnoses. With the help of the BMI calculator below, healthcare professionals can objectively discuss the weight issues with concerned persons.

END_OF_DOCUMENT_TOKEN_TO_BE_REPLACED

What is Body Mass Index?

Body Mass Index or BMI is a parameter calculated by using the tissue mass and height of a person. The tissue mass includes muscles, fat as well as bones. We can describe it as the body mass divided by the body height's square. Thus it is expressed in terms of kg/m2. The BMI calculator is basically used for knowing the deviation of the person's body weight from the normal. This excess or deficiency is considered to be body fat, though there is muscularity and other factors which affect the BMI remarkably.

How are people categorized using the Body Mass Index Calculator?

BMI is the best way to categorize people on the basis of their height and tissue mass. Though the exact dividing line between the classes is still under debate, we have some commonly accepted BMI ranges. These are as follows:

How reliable is the Body Mass Index?

The BMI of an individual doesn't remain the same if we double the body dimensions, as mass scales with the cube of height. It actually becomes double, which implies an unusually high BMI for taller people. This indicates the unreliability of the parameter in measuring the fat level of an individual. There is another parameter named Ponderal Index or Corpulence Index that was initially started by Swiss physician Fritz Rohrer. It uses natural scaling of mass with the third power of height to attain realistic results, unlike BMI. So, it is reliable. The fat mass and muscle mass distribution assumptions are never accurate. If we consider the example of people with more lean mass such as the athletes, BMI makes an overestimation of their adiposity. Similarly, in the case of the people with lean body mass, the excess adiposity is underestimated. Studies indicate that this parameter is better in determining if a person is not obese rather than determining if a person is obese. It is seen that those in the BMI range 20-30 comes under a wide range of body fat percentages. People who are very fit will have an inaccurate BMI because their high muscle mass will categorize them under the overweight class. Parameters such as body volume index are better determinants of obesity measurement in such cases.

What are the children's BMI within the age group 2-20?

A recent study conducted in Britain indicates a higher BMI of females of the age group 12-16 by 1 kg/m2 on an average, compared to the males of the same age. In the case of kids, there is a variation in the method of measuring BMI. The calculated BMI is compared with those of other kids of their age instead of any fixed threshold as in the case of adults. The comparison of the BMI is done against the percentile for children of similar age and gender.

What are health implications associated with abnormal BMI ?

When the calculated BMI of people is below 20 or above 25, it leads to numerous health problems such as:

What are common uses of the Body Mass Index?

This parameter is used for the following purposes:

Here are some of the more reliable parameters: