Checkpoint inhibitors (CPIs) and anti-angiogenic agents are emerging as potential novel treatment choices for advanced cancers including metastatic non-small-cell lung cancer (NSCLC). However, the combination of these two standard therapies has not been investigated in third-line or further-line treatment of patients with advanced NSCLC. This study assesses the efficacy and safety of  Camrelizumab + Anlotinib in patients with advanced non-small-cell lung cancer.

Lung cancer remains the most common cause of cancer-related mortality in China, accounting for about 20% of all cancer deaths. It is worth noting that the distinct and diverse populations and geographic environmental exposures contribute to the unique patterns of lung cancer incidence and mortality in China. According to data from National Central Cancer Registry (NCCR) in 2010, the crude incidence of lung cancer in China was 46.08/ 100,000 population (61.86/100,000 men; 29.54 100,000 women) with over 600,000 new diagnoses (416,333 men and 189,613 women). Non-small-cell lung cancer (NSCLC), accounts for approximately 80% of all lung cancers and is a leading cause of cancer deaths worldwide.

NSCLCs are relatively insensitive to chemo and radiation therapy, and surgery is the treatment of choice if diagnosed in an early stage. However, about 75% of newly diagnosed NSCLC patients already have advanced (stage III or IV) disease. Hence, the overall 5-year survival rates are less than 15%.

In recent years, novel molecular targeted therapies have revolutionized the treatment paradigm for patients with advanced NSCLC, and new antitumor drugs are continually being developed. Angiogenesis plays an essential role in tumor growth and metastasis. Hence blocking this pathway has been considered a successful strategy in the clinical treatment of cancer. Numerous studies reported the role of Receptor tyrosine kinases (RTKs) in modulating cell proliferation, growth, angiogenesis, and metastasis in a wide range of cancers, including non-small-cell lung cancer (NSCLC), colorectal cancer (CRC), and breast cancer.

During the last two decades, there have been breakthroughs in the development of several RTK inhibitors and the FDA has approved targeted drugs including gefitinib, erlotinib, and crizotinib for NSCLC treatment. Of note, anti-angiogenesis drugs such as bevacizumab and recombinant human endostatin, have become treatment options for advanced cancers of the lung, colon, and rectum. However, no standard third-line treatment for NSCLC is available in China for patients in advanced stages at diagnosis. Considering the limited therapeutic response, there is still a need to overcome drug resistance and achieve target-specific sensitivity to decrease off-target-mediated toxicity.

Although it is known that both anlotinib and camrelizumab have a significant therapeutic effect on a variety of tumors,  the safety and efficacy of anlotinib + camrelizumab combination therapy in advanced NSCLC cases still need to be explored.

A total of 88 patients with advanced NSCLC treated in the Oncology Department of The Second People’s Hospital of Wuhu City, China from December 2018 to December 2019 were selected.

In the 3-week treatment cycle, all NSCLC patients were treated with anlotinib hydrochloride (manufacturer: Chia Tai Tianqing Pharmaceutical Group Co., Ltd.; NMPA approval no. H20180003), 12 mg/time and 1 time/d for 2 consecutive weeks, followed by a 1-week break. The treatment was discontinued if patients had disease progression, toxicity intolerance, death, or withdrew the consent. If the patients presented with adverse events ≥ grade III, anlotinib dosage was reduced to 10 mg/d. The dosage was further reduced to 8 mg/d if the patients developed intolerance, and discontinued if intolerance persisted and the disease progressed.

The safety of Anlotinib treatment and the incidence of adverse reactions in both groups were analyzed.

SPSS 23.0 software was used for statistical analysis, and enumeration data are expressed as rate or constituent ratio. A P value <0.05 was considered statistically significant.

This study assessed the safety and efficacy of anlotinib-capsules in combination with Camrelizumab as a third-line treatment or beyond for patients with advanced NSCLC.

The results of the study showed that the clinical effective rate was higher in the CTG (93.18%; 41/44) than in the STG (75%; 33/44). In other words, the combined treatment has more efficacy than the simple method, and can significantly prolong the survival time and improve the prognosis in patients with advanced NSCLC. CYFRA 21-1, is a specific marker for non-small cell lung cancer, especially of squamous cell subtype. Post-treatment comparison of serum tumor marker showed that the levels were lower in the CTG than in the STG (P <0.001); another indication that the combined treatment was more conducive for patients in the advanced stage. Cancer fatigue is the most debilitating side effect of cancer treatment and negatively impacts a patient’s ability to function and quality of life. The lower mean CFS score in the CTG than in the STG is an indication that combination modality could reduce cancer fatigue in patients and improve their quality of life.

In terms of adverse reactions, camrelizumab benefited the majority of cancer patients. Reactive cutaneous capillary hyperplasia is the most common adverse drug reaction of camrelizumab with dermal capillary increase and proliferation of capillary endothelial cells being the major characteristics. The pathogenesis of this reaction remains unclear, which is thought to be due to the imbalance between angiogenesis promoters and inhibitors. In this study, only 3 patients had reactive cutaneous capillary hyperplasia during treatment in the CTG. However, it did not endanger life, and all 3 patients recovered spontaneously after a period of drug withdrawal.

There are a few limitations of this study.  (i) relatively small sample size, which may lead to bias in the results; and (ii) analyzing the median survival period of patients and long-term efficacy of the combined treatment was impossible.

In summary,  as a third-line therapy for advanced NSCLC, the combination of anlotinib capsules and PD-1 inhibitor (camrelizumab) demonstrated encouraging efficacy and a manageable and tolerable safety profile.  In the future, multicenter studies  with a larger sample size are necessary to obtain more consistent data. 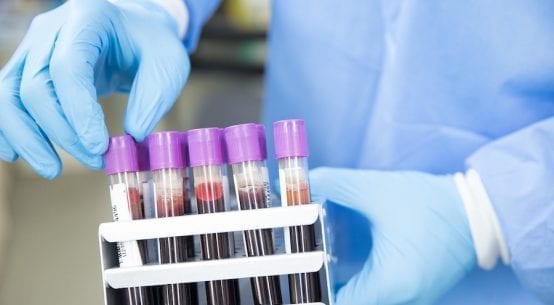